The Man Who Was Doodling 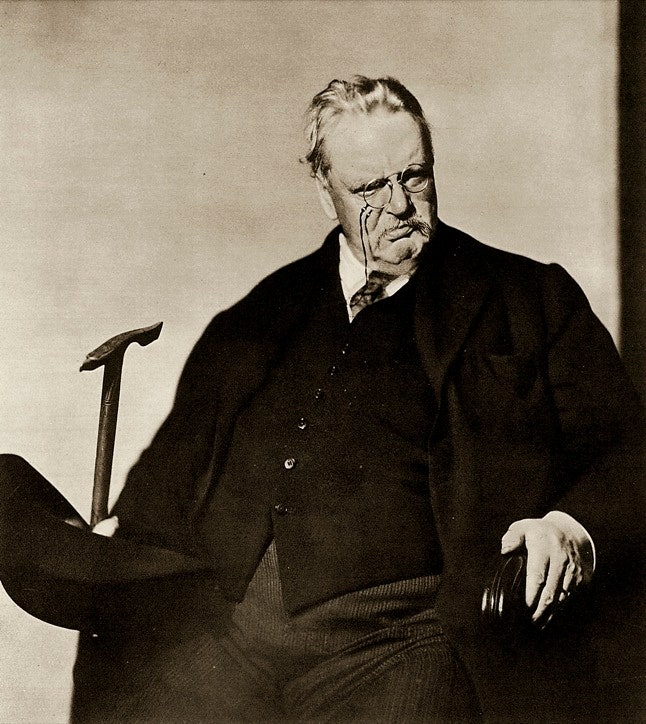 I stopped being embarrassed about my joy of sketching shortly after meeting Gilbert Keith Chesterton. The introduction was made by none other than Clive Staples Lewis, who, I later learned, was an amateur artist himself. Their company was joined shortly thereafter by Lewis’s fellow Inkling, John Ronald Reuel Tolkien, a gifted illustrator in his own right (to name but one of his monumental gifts), and by Dorothy Sayers, who provided an apologetic for art in her book The Mind of the Maker. Lewis was my literary gatekeeper to another world.

The Inklings opened my eyes to the power (and pleasure) of art appreciation as a Christian, but no one has more normalized artistic expression for me than G.K. Chesterton. This is not to say that he has offered me a theological framework for drawing, though I’m sure reading hundreds of pages of his printed work has contributed something to my appreciation for aesthetics. I simply mean that he gave me license to care about theological and philosophical reflection without giving up what some might consider the whimsical hobby of doodling.

The reasons for the decline in casual sketching are surely many. But I personally think a primary culprit must have been the popularization of the typewriter in the late nineteenth century, followed by the decline in the hand-writing of letters throughout the twentieth, both of which led to the complete homogenization of digital communication in the twenty-first century. In our day, the closest things to personalized messages we can expect to see are those silly emoticons that people insert into their Twitter updates. When men actually wrote letters by hand, they were more prone to scribble stick figures or Christmas trees or, like J.R.R. Tolkien, maps of make-believe worlds.

Chesterton, however, did much more than decorate correspondence. Many know him as an erudite giant, a public intellectual, whose writings are permeated with paradox. But few know that his academic career actually began at the Slade School of Art in London. Romance interrupted his studies, though, and set him on a very different vocational trajectory.

As a young college student, he fell in love with Frances Blogg, and to make ends meet and, more importantly, save for an engagement ring, he gained employment with newspapers by writing book reviews. And thus began his career in journalism. He never did complete his art degree, which proves, perhaps, that while artists might be lovers, if they are forced to choose between the two, there is no contest.

Chesterton’s first book, Greybeards at Play, published in 1900, is a collection of farcical prose and sketches. His best friend, Edmond Clerihew Bentley, invented a new genre of sing-songy autobiographical verses, and when these verses were published in 1905 as Autobiography for Beginners, they were illustrated by none other than G.K.C. First editions of both books are displayed on my shelves as sort of Chestertonian trophies, but also as a physical reminder that drawing and thinking are not mutually exclusive endeavors.

The two are not like coffee and cream; one does not dilute the other. They serve more like salt and steakâ€”having a complementary effect if coupled in the right proportions. Readers may determine for themselves which is the meat and which the seasoning. If a picture is truly worth a thousand words, then the answer might be obvious.

E.C. Bentley, to whom Chesterton dedicated his singular The Man Who Was Thursday, was not the only author for whom Chesterton served as an illustrator. He also lent his creative handiwork to many of the works of his prolific Catholic colleague and close companion, Hilaire Belloc. Their collaborative efforts earned them the title “Chesterbelloc” from their mutual friend, though an outspoken atheist, George Bernard Shaw. If you peruse old bookstores or antique shops, you are as likely to find an antiquarian work illustrated by Chesterton as you are to find one written by him.

A Healthy Dose of Levity

In a day when children are the most likely of all age groups to put pencil to paper, it is good to remember that drawing is not a historically childish endeavor. We no longer write letters by hand. We no longer doodle. We now peck away at our mobile keyboards instead, subject to the inevitable intrusions of the autocorrect function. Our communication is less personal in just about every way imaginable.

Still, we find ourselves fascinated by the discovery of old postcards with ornamental writing and decorative, hand-drawn illustrations. And we feel a little sad when we compare the leather-bound volumes of old, filled with beautiful artwork, to the sub-par aesthetics displayed in today’s mass-produced trade books. Something has been lost. And I am not holding out hope that it will ever be regained at least not in my lifetime.

But I am thankful for the reminder I receive every time I look at my Chesterton collection, its volumes filled with theology, philosophy, poetry, history, and literary reviews. Between the aged covers, among the browning pages, I’ll find hundreds of drawings. And I’ll find a little bit of confidence for the times when I put down an academic text to pick up my sketchbook. There is a time for both.

In this way, Chesterton keeps me balanced. His joviality begets a healthy dose of levity, which doesn’t abolish ivory towers, but rather, at a minimum, keeps them firmly planted in the ground. As he once said, “Without education we are in a horrible and deadly danger of taking educated people seriously.” I’m sure, if I look long enough, I’ll find a sketch of his illustrating this very point.

On second thought, maybe I’ll just draw one myself.

This article first appeared in Touchstone Magazine in their May/June 2013 edition.